Announced within the JSN/festival opening – 5:30pm Thursday 12th May, 2022 at the Penola High School Hall. 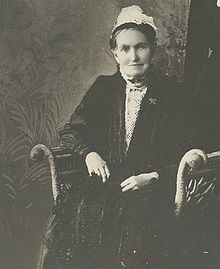 Catherine Edith Macauley Martin née Mackay (1848–1937) was an Australian novelist and poet who published her work anonymously or under pseudonyms such as M. C., Mrs Alick Macleod and Ishbel.

Catherine migrated with her family to South Australia in 1855, settling in Robe and later in Naracoorte. In the course of her education she acquired a love of German language and literature and by the early 1870s she was helping her sister Mary to run a school at Elm Cottage, Crouch Street, Mount Gambier.

From 1872 Catherine’s poems and translations of German poetry appeared in the Border Watch. As ‘M.C.’ she published The Explorers and Other Poems (1874), which included translations from French and German, as well as a long poem about the Burke and Wills expedition. She moved to Adelaide in about 1875, tried to make a living by journalism and became a friend of author Catherine Spence. In 1882 she married Frederick Martin, an accountant whose work took them to Waukaringa, a gold mining town in the north of South Australia.

In 1890 she published anonymously the novel, An Australian Girl, which was well received in Australia and reprinted twice the following year. Under the pseudonym ‘Mrs Alick Macleod’, Catherine Martin published another novel The Silent Sea (1892), which drew upon her experience living in a mining town.

In 1906 she published, under the name Ishbel, The Old Roof-Tree, some impressions and thoughts while abroad in the form of letters to her brother. She published, under her own name, The Incredible Journey (1923) which, written very effectively from an Aboriginal woman’s point of view, was about a mother’s desert journey to recover her son, taken by a white man.

Mrs Martin died in Adelaide on 15 March 1937 in her ninetieth year. She was never as well-known as she deserved to be, partly because almost all of her work was published anonymously or under a pseudonym. An Australian Girl is an interesting book written by a woman of thoughtful and philosophic mind, and The Incredible Journey, with its sympathetic appreciation of the point of view of Indigenous Australians, is among the best books of its kind in Australian literature.

Catherine Martin published essays, stories, poems and serialised novels in the Australian press. Scattered through her work were many literary references, especially to work by European writers. She was sympathetic to the situation of both Australia’s Aborigines and the working class poor of large cities in Britain and Germany. Her female characters were drawn from a feminist point of view, something she shared with her friend Catherine Spence. Criticism of Catherine Martin’s work has varied, but many have praised her lyrical descriptions of Australian landscape.