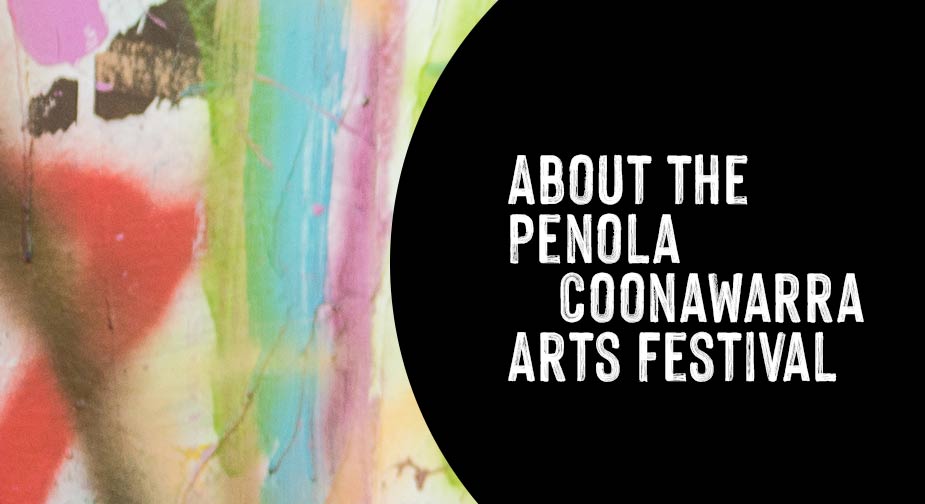 A little about our Festival …

Our Festival takes place annually during May, following the Coonawarra vintage. Our aim is to highlight excellence through the involvement of local, national and international artists. We promote Penola’s rich literary, art and cultural heritage, and the fine wines of Coonawarra through our program.

Exhibitions, workshops, Festival flavours and performances are held in Penola, and at many of Coonawarra’s winery cellar door’s.

Described by Brian Chatteron OAM, General Manager of Co-Opera, as ‘…surely one of the most culturally distinguished regional festivals in Australia’, we believe that the Festival has become a significant event in the state’s calendar.

Each year the festival has attracted major events and exhibitions that have appealed to a broad audience and contributed to its growing profile.

Our Festival committee is made up of passionate bunch volunteers from the Limestone Coast of South Australia. We are a non-profit organisation that began in 1991.

‘The Arts’ … encompasses almost anything you want it to be

It is not is always about the ‘medium’, it is not always about the painting on the wall, the sounds that come from the instruments nor a piece of drama. It is also the lamp post in the street, the creative stories of authors, poetry, the sculptured chair you sit on, the melody of a song, the stamp on a letter, a stained glass window, the photos in your album, the presentation of last night’s meal, a landscaped garden, perhaps even your letter box, the layout of your screen saver, the graphics on your phone, your phone case, the clothes you wear, the interior of your car, a house plan, the movement when you dance und so weiter.

Art has many unique and varied reasons of existence whether this be to document history, to express belief, to awe and wonder, display talent and imagination, to protest, to communicate and to process creativity. We don’t seek to take a structured definition. We want all and everyone to be part of what is, to us ‘the arts’ and its limitless boundaries.

Welcoming all ideas into our festival.

For the safety of everyone in 2020 during a global pandemic, the Festival was sadly cancelled.

The 2018 Penola Coonawarra Arts Festival, held from 17-20 May and in its 27th year, maintained an eclectic and diverse program.  Our Festival prides itself on catering for a broad audience and this year’s program, once again, had wide appeal for all ages and interests.  An estimated 1500 visitors attended the variety of exhibitions, performances and openings with several workshops sold out.  The Balnaves Foundation John Shaw Neilson Acquisitive Art Prize, CoOpera’s ‘The Barber of Seville, The Coonawarra Vignerons Shenanigans Music Hall, Literary components and an ever-popular Family program attracted a combination of locals and visitors from interstate. READ MORE HERE

The 2017 Penola Coonawarra Arts Festival, maintained a solid program of new, exciting and assorted experiences. Community spirit stood tall, welcoming many visitors and artists from across the region and interstate. Our audience demographics continue to widen confirming that we can be very confident in our stance that ‘there is something for everyone’.

The 2016 Penola Coonawarra Arts Festival attendance figures were estimated to be in the vicinity of 3000 with well over 1000 tickets being sold to festival and business run events, an increase of over 20%.

A packed crowd attended the opening night to see Hamish Macdonald awarded the coveted $8000 Balnaves Foundation John Shaw Neilson Acquisitive Art Prize with his entry ‘The Whistling Jack’. The 2016 Art Prize attracted a record 57 entries with our highly acclaimed judge Mr Nick Mitzevich, Director of the Art Gallery of South Australia, being impressed by the strong sense of community and professionalism of the event.

A major highlight of the festival was the guest attendance of The Honourable Jack Snelling, Minister for the Arts, and Mr Hamish Balnaves, General Manager of The Balnaves Foundation, who continues to sponsor what has now become one of the largest regional art prizes in South Australia. The Balnaves Foundation has renewed its continued support with not only announcing another three years of sponsorship but increasing the prize money to a generous $10,000 per annum.

The 2015 Penola Coonawarra Arts Festival was a resounding success with attendance and tickets sales exceeding expectations with more than 2,000 people attending the event. The Balnaves Foundation increased the John Shaw Neilson Acquisitive Art Prize to $7,000, and it was awarded to Adelaide artist Ross Morgan for The Girl with the Black Hair.

Community ownership and participation ensured the 2015 Festival was one of which to be proud. Live performances, competitions, workshops, exhibitions, Little Kids Art Zone and Festival Flavours created a program that drew on talent from the local, regional, national and international arenas.

An additional highlight for 2015 was the honour bestowed on the festival at a special function hosted by the Governor of South Australia, His Excellency the Honourable Hieu Van Le AO, at Government House.  The festival was recognised by the Adelaide Chapter of UNESCO as one of South Australia’s leading regional arts festivals and for its work in enhancing the cultural development of the region over the last 24 years.

In 2014 the Festival collaborated with Melbourne’s John Shaw Neilson Society celebrating the works of the Penola-born poet and featured a poetry reading luncheon, a bus tour of Neilson sites and the Orange Tree Concert with Darryl Emmerson.

The Balnaves Foundation continued its generous sponsorship for the John Shaw Neilson Acquisitive Art Prize increasing it to $6000. The winning entry was by Kate Smith.

In 2013 the festival was the winner of the Limestone Coast’s Arts Category. In announcing the award Alan Richardson stated: ‘The event is one of South Australia’s leading regional arts festivals and the only event of its type in the region.’

The Southern Heritage Singers celebrated their 20th anniversary at the 2013 festival, Penola was yarn bombed and the festival featured its largest-ever family program headlined by the amazing Incredibubble.

2012 witnessed the Coonawarra Hall’s transformation into the music hub of the festival through Shenanigans, featuring country, bluegrass, folk and a host of music workshops.

2011 saw the festival expand its format and welcome The Balnaves Foundation as the sponsor for the $5000 John Shaw Neilson Acquisitive Art Prize and the Coonawarra Vignerons Association awarded a $5000 Sculpture Prize.

The 2008 festival highlights included food guru Dorinda Hafnert, the Janet Seidel Quintet and in 2009 the unforgettable Rhonda Burchmore was followed in 2010 by Renee Geyer.

The 2007 festival saw the introduction of a short film festival, and the announcement of Bryan Dawe as the festival’s first Patron. Andy Seymour returned by popular demand with Swooners and Crooners, and Co-Opera with Marriage of Figaro.

2006 saw the first performance of the Gospel According to Elvis by Andy Seymour in a church. Todd McKenney’s solo cabaret performance was the main feature on the Saturday night. Co-Opera appeared for the twelfth time at the festival and Food SA’s inaugural demonstration, combining fine food with fine Coonawarra wines, was a most successful event. The Cosentino brothers added a magical performance for children on the Sunday.

In 2005 The Idea of North, Bernadette Robinson, Bryan Dawe and Cirkidz were its highlights. Performances by the SA Police Band, Mainstreet Theatre Company working with Penola Primary School, and Co-Opera’s production of Die Fledermaus further enhanced our community’s cultural image.

In 2004 the festival was recognised by Arts SA as a ‘key festival’ and invited to submit an application for funding under the Strategic Investment in Regional Festivals program. The successful application enabled it to engage internationally renowned artists of the calibre of Robyn Archer, Paul Grabowsky, Leigh Warren & Dancers, The Adelaide Chamber Singers and Co-Opera.

In 2003 the festival amalgamated with the Coonawarra Vignerons (now Coonawarra Grape and Wine Incorporated) to create the Penola Coonawarra Arts Festival.

In 2001 the major exhibition, entitled Layers of the Land, involved three artists using stone, water and terra rossa soil to create those layers, which were surrounded by Aboriginal rock art and pieces from the Riddoch Gallery’s Rodney Gooch collection.

In 1999 the Renaissance in Bronze exhibition was a first for regional South Australia and over 30 South Australian artists exhibited their work. In 2000 the Canberra Gallery loaned the committee John Robinson’s Universe Series. Both exhibitions attracted more than 2000 visitors.

James Darling’s installation, Mallee Fowl Nest 3 was a highlight of the 1996 festival and the first of the festival’s major exhibitions. Don Dunstan was the guest of honour that year. He observed that it was ‘a festival of quality and standard’ and commended the outstanding work it was producing.

In response the group then organised the 1992 John Shaw Neilson Commemorative Week to coincide with the 50th anniversary of the poet’s death. And so the Penola Festival was born. It is a contemporary celebration of the literary and arts heritage of its community and is intended to highlight excellence through the involvement of local, national and international artists. It has featured major exhibitions by artists, music performances, writers’ weekends resulting in the Vintage Series of books, a national competition for the Max Harris Literary Awards, a village fair and a farmers’ market.

In 1991 Peter Goldsworthy and Heather Nimmo, former Penola High School students, were guest speakers at the school’s literary luncheon and from there evolved an interested group, who were prompted by Max Harris to celebrate ‘the nation’s most loved lyric poet’ Penola-born, John Shaw Neilson.