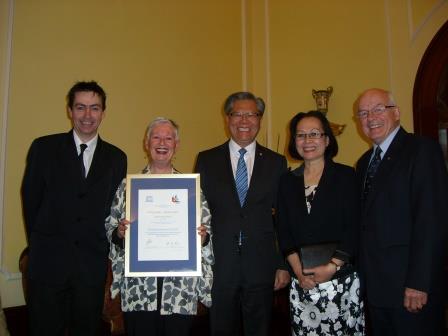 The Penola Coonawarra Arts Festival has been honoured by the United Nations at a special function hosted by the Governor of South Australia, His Excellency the Honourable Hieu Van Le AO, at Government House on 10 August 2015.

In addressing the 100 guests assembled at Government House, Chairperson of the UNESCO Adelaide Chapter, Mrs Helen Rice, commended the Festival to the Governor stating, “this is one of South Australia’s leading regional arts festivals,”.

The citation acknowledges the Festival “for an outstanding contribution to the regional cultural life of South Australia, promoting all facets of the Arts, and cultural tourism.”

The Penola Coonawarra Arts Festival was one of four recipients honoured by UNESCO, Adelaide Chapter. The other three were:

The award certificate is on display for the public alongside the Festival’s 2013 SA Regional Arts Award in the John Shaw Neilson Gallery of the Penola Visitor Information Centre.

The Penola Coonawarra Arts Festival relies on a team of volunteers to make it happen. We’re a diverse bunch – there are educators, child and youth workers, sales and small business owners, marketing and pr practitioners, winemakers, graphic designers, retirees, artists and musicians. If you’re passionate about the arts, community, music, wine, food and learning – and keen to have a whole lot of fun – we’d love to hear from you!

Drop us a line at [email protected] and we’ll welcome you aboard.